Specifically, the content-management software-maker says its 10.1 incarnation — an update of the version 10 it released at the end of 2015 — streamlines access to DOL-mandated documentation, makes client-centric collaboration easier and creates an auditable trail that can reach even into the realm of social media.

More generally, Laserfiche helps firms cut operating expenses in the face of higher costs associated with DOL-mandated compliance and the need to replace revenue streams truncated by the new rule, according to Thomas Phelps, the company’s top strategist.

Bill Butterfield, a wealth industry consultant with Aite Group, isn’t surprised a big-name content manager like Laserfiche sees the DOL rule — set to take effect in 2018 after an 18-month gear-up period — as a growth opportunity.

Where it was once at least possible to see content-management software as a luxury from the perspective of general operations, it’s harder to make that argument “from a compliance point of view” now that the DOL rule is impending, says Butterfield. “It’s not a time for keeping track of client documents with sticky notes and accordion files.”

But Butterfield says Laserfiche — “which you hear a lot about in the broker-dealer space” — isn’t the only content-management company vying for wallet share from financial advice firms scrambling to cope with heavier compliance burdens. His list includes Docupace, IBM, NetDocuments, Open Text, Oracle, Perceptive Software, and Thomson Reuters.

Laserfiche, which has been in business since the late 1980s, says it comes into play for DOL compliance in three main areas: documenting client correspondence, audit-trail reporting, and internal policies and procedures compliance. 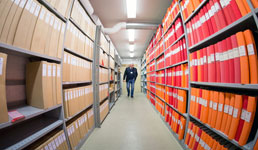 The DOL rule triggers fiduciary requirements whenever an FA gives a client specific investment advice relating to a retirement account. By digitizing documents — and that’s everything from emails, social-media exchanges, best interest contracts, prospectuses and meeting notes — and putting them in a searchable database, Laserfiche equips firms to track and report on all client communications as the DOL requires.

The audit trail is important in compliance reviews and full-blown audits — whether by the DOL, Finra or the SEC. In addition to making documents retrievable, Laserfiche says it makes falsifying the dates on them impossible, strengthening its software as a tool for audit defense and general compliance.

Finally, the DOL rule requires firms to publish new policies and procedures online — something a content-management company like Laserfiche can obviously accomplish.

And for internal purposes, Laserfiche can make online “policy acknowledgment” forms available to advisors as proof they understand new policies.

In general, because the DOL rule forces brokerages to look at new compensation structures as a result of doing less commission-based business in the retirement arena, many of these firms will see at least temporary margin compression, according to Laserfiche marketing manager Linda Ding.

She says Laserfiche could save firms money by streamlining document processing and reducing the risk of non-compliance with the new DOL rule.

The cloud version of Laserfiche 10.1 goes for $50 a user per month, according to Phelps.