The number of clients of registered investment advisor firms increased by 6.4% to 64.7 million in 2021, according to industry data.

The total number of clients served by registered investment advisor firms grew to a record high in 2021, albeit at a slower rate of growth than in previous years, according to a recent report.

The findings are from the 2022 Industry Snapshot report by the Investment Adviser Association and the National Regulatory Services.

The continued growth in the number of clients — especially amid the Covid-19 pandemic and an economic downturn — reflects the strength of the RIA industry, according to IAA chief executive officer Karen Barr.

“From my perspective, the growth in individuals as clients is really stemming from people reassessing their retirement plan, people dealing with a pandemic, the turbulent market volatility, concerns about the geopolitical environment, inflation,” she said.

“It's been a turbulent couple of years for individual clients, and I think they're seeking more advice,” she added. 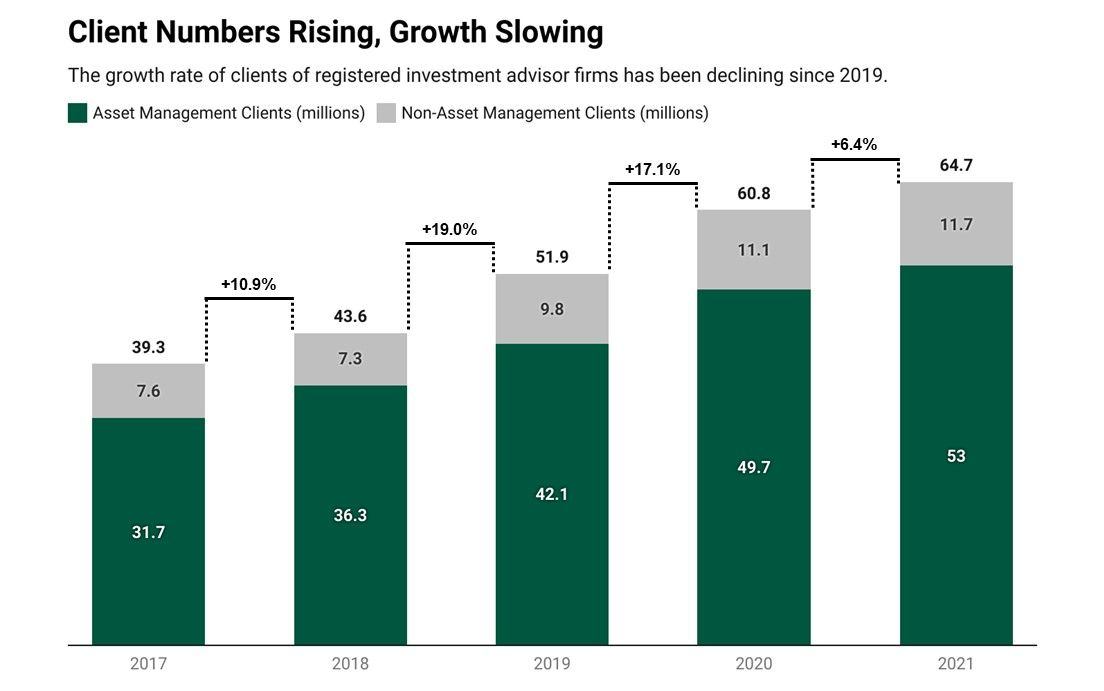 IAA's Barr expects demand for advisory services to continue to rise as the economy, although facing a potential recession, recovers from the pandemic.

The state of the economy and the volatility in markets have been among the main drivers for demand for financial advice, according to Gordon Ross, managing director of the enterprise group of RIA network Dynasty Financial Partners.

“[I]f you think about some of the larger trends at play, they all point towards the need for good financial advice,” Ross said.

“For example, we're in an inflation environment right now, but interest rates are still relatively low compared to historic levels. And so being able to save effectively and get a good rate of return on investments is very important to people,” he added.

The client numbers have also been helped by the rise in the number of people entering retirement and living longer, according to Mike Durso, chief investment officer at ShoreHaven Wealth Partners.

“We have a lot of people who are either exiting the workforce or selling their businesses and passing on to the next generation with some sort of liquidation event. And so, as that generation gets older, I think that they see the need for an advisor to help them into retirement as opposed to getting them to retirement,” Durso said.

Meanwhile, the amount of assets of the RIA firms’ clients have been rising since 2017.

High-net-worth clients — who make up the most of the RIA firms’ individual client assets — have been more able to deal with the financial impacts of the pandemic, according to Shorehaven’s Durso.

“[For a] lot of people who were upper class or middle upper class, Covid didn't affect them as much from a wealth standpoint,” Durso said.

“When the markets were going up, spending was going down. I think that there was additional wealth created for a lot of people and so as you create additional wealth, more people tend to need a financial advisor,” he added.

Some HNW individuals who didn’t seek out advisors invested on their own at the height of the pandemic, but that activity has since subsided, according to Durso.

“I think the one thing that really could have skewed those numbers a little bit was the amount of people who were working from home and trying to manage assets themselves,” he said. “I think a lot of people were home, they had a lot more time.”