With the explosion of products on the market, and many managers looking to catch lightning in a bottle with strong returns in niche asset classes, the arms race among ETF providers to come up with a catchy ticker rages on.

ETFs started in the stodgy institutional world, but when it comes to naming, they’ve always had a bit of flair.

Say “SPY” or “the Qs” and ETF-followers instantly know you are talking about the flagship products State Street SPDR S&P 500 ETF and Invesco’s QQQ ETF, which tracks the Nasdaq index. Both products come with it a heavy marketing budget, which may have cemented their icon status.

And a decade ago, Pimco co-founder Bill Gross fought tooth and nail (and wallet) to get his Total Return ETF the ticker BOND, even though a rival shop had reserved it with the NYSE.

But with the explosion of products on the market, and many managers looking to catch lightning in a bottle with strong returns in niche asset classes, the arms race among ETF providers to come up with a catchy ticker rages on. 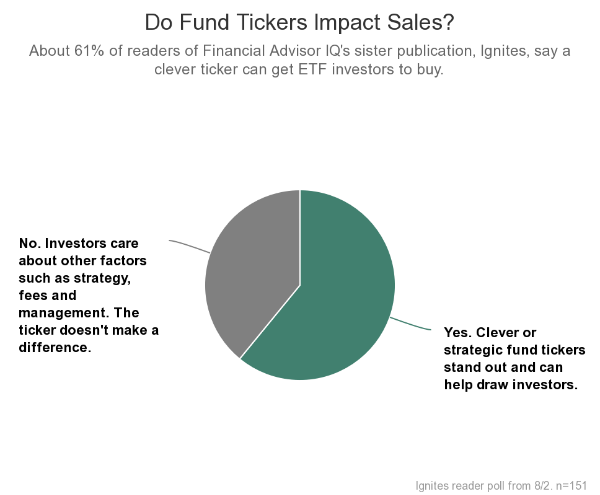 These tickers may seem like gimmicks, but they’re tactics that have worked to spark investments. The Roundhill Metaverse ETF, ticker META, saw its assets skyrocket last fall when Facebook announced it would henceforth be known as Meta Networks. The fund went from $150 million in late October to $875 million in February, when the ETF sponsor announces it was selling the ticker to the social media giant for an undisclosed sum. The ETF, now trading by the ticker METV, stood at $519 million as of Monday.

The ETFMG Prime Cyber Security ETF also captured investors’ attention in 2014 with the ticker HACK. High-profile data breaches in 2015 drove interest in cyber stocks, and assets in the ETF soared. It stands at $1.7 billion.

ETF sponsors and consultants told Brian Ponte of Financial Advisor IQ’s sister publication, Ignites, that they see names as an important marketing tool to stand out, but there’s a risk of venturing into the gimmicky. It’s a wise point for advisors, too.

Clients immersed in the financial Twitterverse or forums like Reddit might ask about tickers creating buzz online, or that they see in advertisements plastered on TV or digital media. But some of the ETFs may not have investment strategies that jive completely with the ticker, consultants warn. And how an ETF approaches the theme – or whether the theme matches a client’s risk tolerance and goals is far more important than a three- or four-letter label.

You can’t judge an ETF by its ticker, although it might make you flip through the pages of its prospectus.