FA Says Ameriprise Ahead In Social Media Marketing. This Might Be Why.

The company believes that social media is a “highly effective way” for advisors to prospect for clients, especially in their localities, and the upside is “too great to ignore.”

Gendell, who has been in the industry since 1998, said earlier this month that “Ameriprise is ahead of the curve” in this regard and he “started getting new referrals almost immediately after” making the move.

Ameriprise believes that social media is a “highly effective way” for advisors to prospect for clients, especially in their localities, and the upside is “too great to ignore.”

That’s relatively progressive thinking in an industry that has generally been slow to embrace social media — its use picked up last year, partly as a response to fewer opportunities for in-person networking — and wary of compliance complications.

Ameriprise's Social Media Tips Source: Ameriprise Financial Five tips for advisors to use social media to build their practices Mitigate Risk. Partnering with a social media back engine like Hearsay helps mitigate compliance risk by screening both inbound and outbound content for keywords and phrases to avoid. Be dynamic and be yourself. Social media is about authenticity. Even when you’re posting pre-approved content, add a personal note to better connect with your audience, provide insights and distinguish you from your competition. Listen and engage. Social media is a conversation, so it’s important to not just post, but to listen and engage, too. Grant “On Behalf Of” access. For social media to be most effective you should post regularly and never go dark. Bring your social network to life. The most powerful relationships are the more personal ones.

Gendell — who joined Ameriprise in Atlanta and has $285 million in client assets, according to the firm — says social media has opened “completely new opportunities” for client prospecting for him across the U.S. He has been able to connect with prospects beyond his locality and with multiple people — “children, grandparents, siblings, aunts and uncles” — within families.

Posts that get more personal — such as “fun office updates” — get the best results, according to a spokesperson for Ameriprise.

Sometimes, posts that get engagement have nothing to do with work, says Niraj Chhabra, an Ameriprise advisor registered with the firm since 2006 who has an attorney client-focused practice in New Jersey.

“We leverage Facebook paid ads to advertise our attorney seminars and networking events,” Chhabra said. “We also recently started using Facebook videos to spotlight successful and interesting attorneys. In addition to financial articles, I’m able to share glimpses of my personal life with clients and prospects." 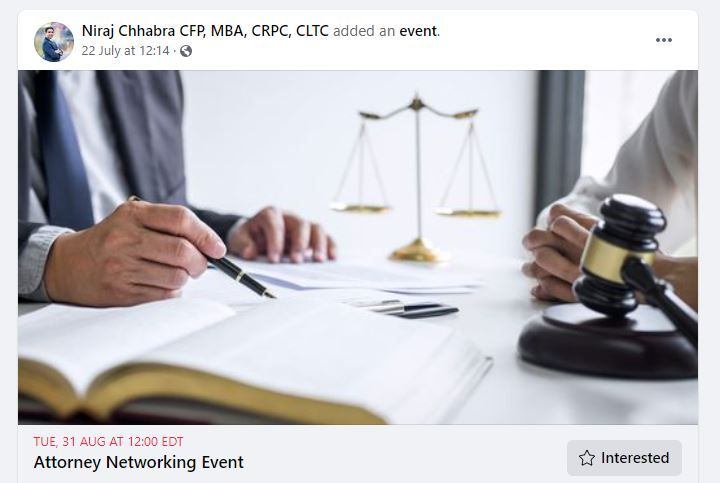 If Ameriprise advisors want a social media presence beyond a standard LinkedIn profile, they have to enroll in a monthly fee-based program called GoSocial that grants them access to a catalog of pre-approved social media posts, among other things.

The need for social media marketing to comply with regulations is part of the reason for the fee, according to the Ameriprise spokesperson, who didn’t disclose the actual fee or its structure. GoSocial has been in place for six years, the spokesperson noted.

Broker-dealers are required to review and archive all social media posts and comments. By giving advisors a slate of options to post, that review gets done on the front end by the firm’s supervision team, the spokesperson notes.

Advisors can always create their own content that must go through Ameriprise compliance checks, or they can adapt pre-approved material, according to the spokesperson.

That ability for advisors to customize their content is a “key differentiator Ameriprise provides within this program,” the spokesperson said. “Custom content drives significantly higher engagement rates within the social media platforms and thus this functionality helps our advisors drive meaningful connections with clients and prospects.”

Social media posts risk violating the Securities and Exchange Commission’s advertising rule under the Investment Advisers Act of 1940. However, the SEC amended that rule in December to allow testimonials and endorsements, including on social media. The changes will go into effect in November 2022.

Without giving specific numbers, the Ameriprise spokesperson says the number of advisors enrolled in GoSocial is five times the industry average and they “reported both higher usage and higher effectiveness within the social media channels.”

GoSocial is powered by Hearsay Social, a provider of social media services for the financial services and insurance industries, the spokesperson says.