The package goes into law as the global death toll from the coronavirus rises to more than 33,500 people.

President Donald Trump has signed into law the approximately $2 trillion economic stimulus package aimed at thwarting the economic fallout from the coronavirus pandemic, only hours after the House of Representatives approved the bill on Friday despite an initial hurdle, according to news reports.

“I want to thank Democrats and Republicans for coming together and putting America first,” Trump said on Friday in the Oval Office, according to the Wall Street Journal.

“I never signed anything with a T on it,” he added, referring to the size of the package, the newspaper writes. 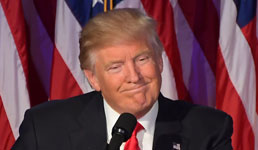 The Senate had voted unanimously on Wednesday to approve the $2 trillion package. The House was expected to move quickly on the legislation on Friday, but Rep. Thomas Massie, R-Ky., tried to force a recorded vote, drawing criticism from his fellow lawmakers who argued that having them show up in person threatened to spread the coronavirus further and stall much needed aid, the Journal writes. At least five lawmakers have tested positive for the virus, according to the newspaper.

House Speaker Nancy Pelosi, D-Calif., however, working with House Minority Leader Kevin McCarthy, R-Calif., and House Majority Leader Steny Hoyer, D-Md., was able to assemble a team of legislators — many of them taking red-eyes or long road trips to get to Washington, D.C. — to reach a quorum of 216 lawmakers in order to outflank Massie, the Journal writes.

Some of Massie’s fellow congressmen called the lawmaker out for stalling the package, according to the newspaper.

“It’s an act of vanity and selfishness that goes beyond comprehension,” said Rep. Dan Kildee, D-Mich., according to the Journal. “He should be ashamed of himself and the country should scorn him.”

Trump, meanwhile, called Massie “a third-rate Grandstander,” according to the newspaper.

First reported in China at the end of 2019, the coronavirus has infected more than 710,400 people in at least 171 countries and led to the deaths of at least 33,510 around the world as of Monday morning, the New York Times writes. In the U.S., at least 141,995 have tested positive for the virus and at least 2,486 have died, according to the newspaper.