The Office of the Comptroller of the Currency has banned Wells Fargo’s former CEO from the industry and fined him and six other executives in connection with the bogus account scandal at the company’s retail bank, according to news reports.

In addition to agreeing to a ban from the banking industry, John Stumpf, the former CEO, agreed to pay a $17.5 million civil penalty as part of a settlement, Reuters writes.

Former human resources head Hope Hardison settled the OCC’s charges for $2.25 million and former chief risk officer Michael Loughlin settled for $1.25 million, according to the newswire. Five other former Wells Fargo executives, including former retail banking head Carrie Tolstedt, refused to settle, Reuters writes. Tolstedt could face a civil monetary penalty of up to $25 million, according to the newswire.

Discussing the sales scandals and the subsequent scrutiny from regulators during a call with analysts earlier this month, Wells Fargo’s new CEO and President Charles Scharf said the company had made “terrible mistakes.” 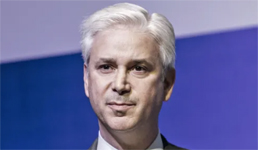 “We have not yet met our own expectations or the expectations of others. We must do what’s necessary to put these issues behind us,” said Scharf. He added that the company may further reorganize its management following his review of its various businesses.

“The path to success will be bumpy,” he said.

The OCC took a rare step in holding the senior executives personally accountable, Reuters writes. The civil penalty the regulator imposed to Stumpf is the largest it’s ever secured from an individual, according to the newswire.

Reuters could not reach Stumpf for comment, the newswire writes.

Stumpf had resigned from the firm in October 2016 following revelations that thousands of its employees opened millions of fake debit and credit accounts without the customers’ knowledge. The $185 million fine Wells Fargo paid that year was only the beginning of regulatory scrutiny that has since extended to most of the company’s business divisions, including its wealth management unit.

The company has paid out over $4 billion in fines and penalties since the 2016 revelations, according to Reuters.

Scharf issued a statement yesterday, saying that the “OCC’s actions are consistent with my belief that we should hold ourselves and individuals accountable.”

“They also are consistent with our belief that significant parts of the operating model of our Community Bank were flawed,” Scharf says in a statement.

He added that the firm would “not make any remaining compensation payments” to any of the executives fined until it reviews the filings.

The OCC’s investigation is still ongoing and may result in more charges, a person with knowledge of the matter tells Reuters. And the OCC isn’t the only one investigating Wells Fargo. The Department of Justice and the SEC both have ongoing investigations as well, the newswire writes.