Battle of Titans: How Wirehouses Stacked Up in 2019

The Swiss bank’s wealth management unit wasn’t aggressively hiring last year, and additions to its advisor roster focused mainly on advisors who service ultra-high-net-worth clients, which continues to be its strategy.

In line with efforts to grow its global wealth management business, UBS says UHNW client relationships and advisors will be integrated into regional business units to increase speed and proximity to clients. 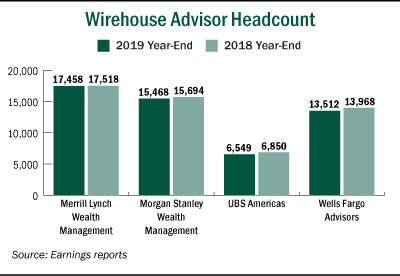 The bank — which is continuing efforts to rebuild its brand following various scandals and regulatory scrutiny in past years — attributed the drop in advisor headcount mainly to advisors retiring and leaving the industry.

Despite the decline, the bank says Wells Fargo Advisors had its “best recruiting year since 2016 with record productivity among new hires.”

And the wirehouse has previously noted that it has been “very good at retaining the assets” of advisors when they exit the firm.

The wirehouse says its fourth quarter numbers dipped, in particular, due “in large part to seasonally lower hiring in our training program.”

Merrill Lynch attributes its 18% growth in client assets in 2019 to higher market valuations and an $88 billion in net inflows in the fourth quarter.

Morgan Stanley’s client assets rose 17% last year. Part of the wirehouse’s plan to grow its client assets over the next five to seven years is capturing one million workplace plan participants who will be serviced mainly through digital channels.

The wirehouse’s purchase last year of Solium Capital, an administrator of workplace equity plans, plays a key part in the strategy.

Although UBS Americas' client assets grew 17% last year, it had $9 billion in net outflows in the fourth quarter. When asked about this outflow, the Swiss bank’s CEO emphasized the quality over quantity of its client assets.

Wells Fargo Advisors had the smallest growth in assets at 11% last year, which it attributed partly to higher market valuations. 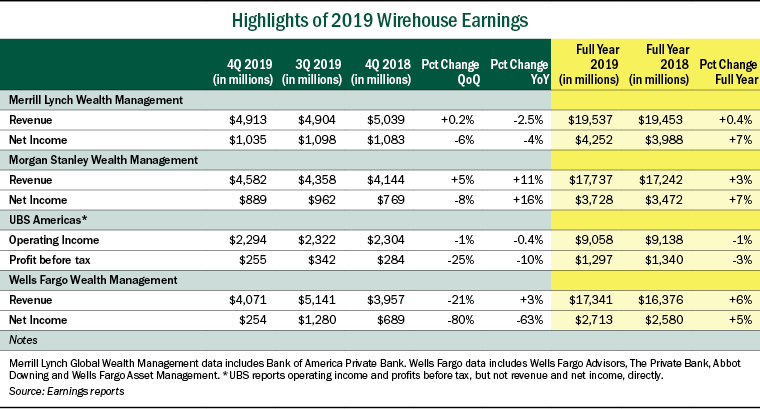