The ranks of certified financial planners became increasingly diverse during 2019, although white males still make up 73% of CFP professionals.

Overall, the board reported 86,378 CFP professionals at the end of 2019, an increase of 3.9% over the prior year, according to a press release from the CFP Board.

However, their total number was only 3,259, which is about 3.8% of all the CFP professionals.

The CFP Board’s Center for Financial Planning embarked on a diversity push in October 2018. In February 2019, the CFP board rolled out its “I am a CFP Pro” video to expand that campaign. At the time, black or Latinx CFPs made up just 3.5% of CFP designees. 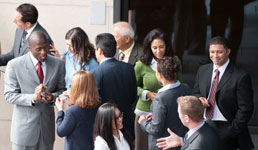 "CFP Board’s focused effort to improve diversity in the profession is having an impact," Kevin Keller, CEO of the CFP Board, says in the press release. "The effort is reflected in the expanding profile of CFP certificants."

"We’re confident we will continue this momentum in 2020," he says.