The compliance of broker-dealer firms with rules on best execution, bank sweep programs, and the SEC's Regulation Best Interest are among the risk monitoring, surveillance and examination priorities top of mind for Finra in 2020.

The 2020 priorities also include digital assets and the Consolidated Audit Trail, among other items.

Finra will be looking for conflicts of interest in order routing decisions, with the emphasis partly due to the recent race to zero commissions among broker-dealer firms with online platforms.

Just this past December, Finra fined Robinhood Financial $1.25 million for best execution violations involving customer equity orders and related supervisory failures. Robinhood neither admitted nor denied the charges in settling the matter, but consented to the entry of Finra’s findings in its records.

The Silicon Valley firm has been a registered broker-dealer since 2013 and has been providing free trades on U.S.-listed stocks on its smart phone app since it launched.

Finra Rule 5310, or Best Execution, requires firms to use reasonable diligence to ascertain the best market for the subject security and buy or sell in such market so that the resultant price to the customer is as favorable as possible under prevailing market conditions.

Broker-dealer firms that route customer orders away for execution can satisfy their best execution obligations by conducting either an order-by-order review of execution quality or a "regular and rigorous review."

While Charles Schwab, TD Ameritrade, E*Trade and other competitors that slashed their online trading commissions to zero in October have been focusing on the marketing element of their actions, consumer advocates have warned that investors could suffer from the free trading and have questioned if regulators are paying close enough attention.

Reg BI will be a heavy lift, something that the firms need to be spending a lot of resources on.
Robert Cook
Finra

In its 2020 priorities letter, Finra says it may review customer order processes; how enhanced order routing information is incorporated in "regular and rigorous” reviews; and whether changing to a zero-commission model has resulted in changes to routing practices, execution quality, review policies, or the level of trading rebates or payments for order flows.

In addition to scrutinizing routing decisions, Finra will also be looking into the handling of odd-lot activity, which the SRO says has increased significantly; the reasonableness of best execution policies and procedures for best execution and fair pricing for U.S. Treasury securities; and complaints alleging that large customer option orders have received inferior execution prices.

In its defense, Merrill Lynch argued in court that “without this feature, uninvested cash would earn no interest.”

In its 2020 priorities letter, Finra says it will examine whether firms clearly communicate the nature of the bank sweep arrangements and alternatives for cash management, as well as any incorrect implication that bank sweeps are the same as checking or savings accounts, or are insured by the Federal Deposit Insurance Corp., among other issues.

Compliance with the SEC’s Regulation Best Interest is a priority for Finra, just as it is for the SEC.

Reg BI requires broker-dealers and their registered representatives to comply with the best interest standard when making a recommendation of any transaction or investment strategy involving securities to a retail customer. The SEC set June 30, 2020 as the compliance deadline for the implementation of the rule, which the regulator believes gives “sufficient time” for firms to comply with the requirements.

Before the compliance deadline, Finra will review the broker-dealer firms’ preparedness to comply with the new rule. The SRO started this process in November.

After the compliance deadline, Finra will examine the firms’ compliance with Reg BI and the Customer Relationship Summary or Form CRS.

Finra reiterates it will work with SEC staff for consistency in examining broker-dealers and their associated persons for Reg BI and Form CRS compliance. 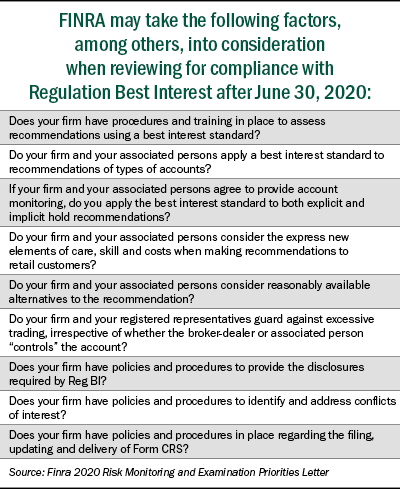 At a conference in November, Finra CEO and President Robert Cook said complying with Reg BI will be “a heavy lift, something that the firms need to be spending a lot of resources on, obviously depending on the size of the firm and where they are in their management of conflicts.”

In a guide prepared by Deloitte for Sifma, the consulting firm says firms could benchmark the cost of complying with Reg BI to what they spent to prepare for the Department of Labor’s fiduciary rule before it was quashed in appeals court.

Meanwhile, seven states — New York, California, Connecticut, Delaware, Maine, New Mexico and Oregon — and the District of Columbia have filed a complaint for declaratory and injunctive relief against the SEC and Chairman Jay Clayton in New York because of Reg BI. The suit argues that the SEC overstepped its authority by deviating from what was prescribed by the Dodd-Frank Wall Street Reform and Consumer Protection Act of 2010, among other things.

RIA XY Planning Network is also suing to challenge the SEC’s authority to issue Reg BI, asking the court to vacate it.

Digital assets and the CAT

Finra says digital assets raise “novel and complex” regulatory issues and it is working closely with the SEC to understand the business plans of firms that want to offer them and how securities laws apply to those firms.

The SRO notes that it has been receiving “an increasing number” of new and continuing membership applications from firms “seeing to engage” in the digital assets business.

The tension raised by Facebook’s Libra has been “good” because it generated discussions among regulators.
Jay Clayton
SEC

In March, Brett Redfearn, director of the SEC’s Division of Trading and Markets, addressed concerns about digital assets by saying the watchdog has been pondering whether there is a need to craft separate regulations for digital assets such as cryptocurrency.

“We do have a securities law framework that’s probably valid for any type of security,” Redfearn noted.

At an SEC oversight hearing in September, U.S. House Committee on Financial Services Chairwoman Maxine Waters and others on the committee raised concerns over Facebook’s plan to launch “Libra,” a global digital currency.

The SEC’s Clayton said the tension raised by the unveiling of Facebook’s Libra project has been “good” in the sense that it has generated discussions among regulators, investment advisors and investors.

Meanwhile, Finra reminds firms that they will be required to begin reporting transactional data to the Consolidated Audit Trail in April 2020 and will be subject to surveillance and investigations to review compliance.

The CAT is a single comprehensive database expected to store an unprecedented amount of sensitive trade data and personally identifiable information. In an earlier announcement from the SEC, the information included an investor’s name, address, date of birth and Social Security number or Individual Taxpayer Identification number.

But Clayton has said the CAT will minimize any personally identifiable information it takes and, in fact, will not take any PII “unless we believe that we can protect it.”