Finra is stepping up efforts to recruit female arbitrators for its independent arbitration forum to help improve representation and make the process fairer, according to Richard Berry, director of the Office of Dispute Resolution.

The arbitrator diversity efforts have led to a steady increase in female arbitrators — from 26% of the newly added arbitrators in 2015 to 39% in 2019.

And yet, Berry — who made arbitrator diversity one of his priorities in 2015 — says he’s “just not satisfied with where we are with this demographic.”

Berry declines to give a specific percentage target but notes that more than half of the U.S. population is female, and women have been steadily increasing as a percentage of the workforce.

Without providing numbers, Berry adds that many of the broker-dealer industry’s registered representatives and customers are women.

“We’re going to focus the 2020 extra push on the gas on diversity in terms of gender,” Berry says. “We’re here for all parties, and we want to make sure that we’re the fairest arbitration program that we can be. Having a diverse set of arbitrators is a key component of having a fair arbitration program.”

This year, Finra is leveraging relationships it has developed with various women’s groups, such as the Alpha Kappa Alpha Sorority. Recruitment efforts at sorority events “have been a tremendous resource for us in the past,” says a Finra spokeswoman.

Firna is also continuing partnerships with groups, including the National Association of Women Business Owners, Women’s Business Enterprises, and the Leadership Institute for Women of Color Attorneys. 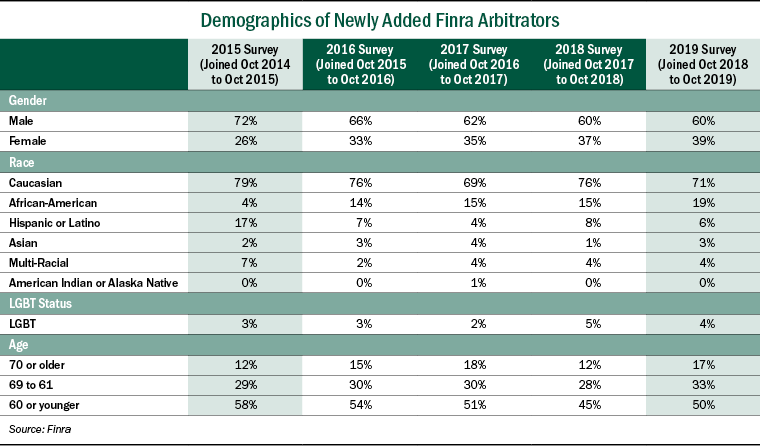 When asked if the focus on recruiting female arbitrators would disadvantage efforts to recruit other impacted groups, such as African-Americans or Latinx, Berry says the efforts will be consolidated.

Berry also isn’t worried about potential backlash among white males who believe diversity targets are detrimental to them.

"You’re never going to please everybody. But I think focusing on what’s right and fair is what I’ll do, no matter what the backlash is. And having a diverse set of arbitrators is the right thing to do.”

Besides, Berry points out, white males still make up most of the arbitrators in Finra’s arbitration forum. Finra had 7,839 arbitrators as of the end of December.

Around 69% of the arbitrators are male and around 81% are Caucasian. Finra doesn’t release data specifically on male Caucasians.

“We have a long way to go; we’re not there yet,” Berry says, referring to his ultimate diversity goals. 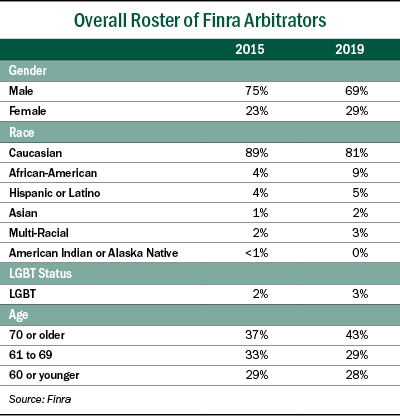 Expanding the diversity of the Finra arbitrator pool was among the goals of a 13-member dispute resolution task force formed in July 2014. That task force was created precisely to suggest strategies to “enhance the transparency, impartiality, and efficiency” of Finra’s arbitration and mediation forum.

At Finra’s arbitration forum, the arbitrators are classified as public or non-public.