Smart beta isn’t winning any new fans among financial advisors, who often find the products overly complex to use and explain to clients, new research has found.

Smart beta ETFs have been a successful growth story in recent years, with assets invested in products classified as “strategic beta" by Morningstar totaling $857 billion at the end of June, up 80% from $475 billion three years earlier. That compares, for example, to a 26% increase in mutual fund assets (excluding ETFs) over that period, according to Lipper data.

But according to Ignites Research — a sister company of FA-IQ in the Financial Times stable — the proportion of financial advisors using smart-beta ETFs plateaued between 2016 and 2019. While smart-beta believers are putting more assets in these products, the growth of new believers has stalled.

Smart beta refers to investment products that track indexes that aren’t tied to traditional market capitalization weighting. These indexes can target a single factor, such as weighting by revenue, or provide exposure to multiple factors, such as value and dividend yield, or even more complex strategies. Unlike fully active strategies, smart-beta products tend to display their holdings daily and follow simple, mechanical rules.

The investment rationale for smart beta rests on the idea that traditional, market cap-weighted exposure leaves investors exposed to market inefficiencies that could be exploited for gain. While such a proposition has been attractive to advisors and clients alike, the adoption of smart-beta ETFs has essentially stalled since 2016: 29% of elite advisors polled by Ignites Research used the products in 2016 and 30% use them in 2019. And the portion of advisors who are simply not interested increased during that period, from 26% in 2016 to 35%.

And while smart-beta ETFs enjoyed AUM growth of 80% over the past three years, they’ve barely outpaced the 76% growth in the overall ETF market in the U.S., according to Morningstar data. As a result, the market share of smart beta within the total ETF market has merely edged up from 21.2% at the end of November 2016 to 21.6% at the end of November 2019. Morningstar has referred to the strategic-beta ETF as a “maturing” market.

Thomas Yorke, an advisor with Oceanic Capital Management in Red Bank, N.J., says his firm uses multiple smart beta products, both as complements to passive products in well-defined markets — like large- and mid-caps — and to active allocations in areas where managers can more easily add value, like fixed income and emerging markets.

“We do like them, but you have to be careful,” says Yorke. “Some products — for instance low volatility, which outperformed in the fourth quarter of 2018 — have very different constructions and could attract new investment at a time when some major components (real estate and utilities) have already had major moves.” 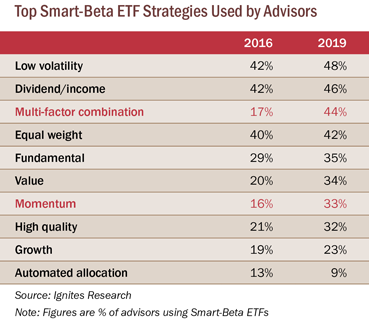 ETFs providing exposure to multiple factors leapt in popularity over the past three years, from 17% of advisors using them in 2016 to 44% in 2019. Advisors tend to get comfortable with simpler, single-factor products before moving into more complex, multifactor ETFs. For different reasons — likely the persistent rise of U.S. stocks — momentum has jumped in use from 16% of advisors in 2016 to 33% more recently.

There are some nuanced differences between channels. Low-volatility ETFs are the most popular among broker-dealers but rank only fifth among RIAs. Value, which ranks eighth for the broker-dealers, is number one for RIAs. And while equal weight ranks fourth overall, it’s the top strategy among midsize advisors.

“Smart beta is the new moniker for market timing based on a back-tested algorithm that may or may not work in the future,” says David Haraway, an advisor with LPL in Colorado Springs, Colo., adding wryly, “the more complex, the better, because your target market may not recognize it for what it is.”

While some advisors may believe they’ve reached their limits on these products, another element slowing sales is the host of problems that advisors associate with the products — problems that fuel advisors’ skepticism.

Chief among these are the complexity of the strategies (cited by 38% of advisors), difficulty in explaining smart beta to investors (37%), and uncertainty in how to fit them into portfolios (34%). These three obstacles are connected as they can compound each other.

One advisor in the Ignites Research study noted: “Multifactor ETFs can be impressive, but sometimes they’re so complicated that I can’t find a place for them in portfolios.”

Yorke says smart beta funds can be difficult to explain, causing customers’ eyes to roll, “but we try to strip out the minutiae and focus on the value add.” 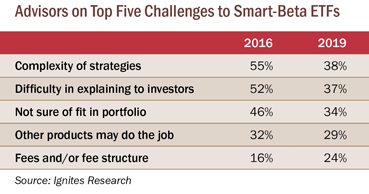