New UBS Comp Plan a Likely Haircut for Many FAs

Good times in the equity markets this year have not translated to better news for FAs from their wirehouse employers for 2020 compensation.

This week, UBS announced it had increased the thresholds in the 2020 compensation grid required for its roughly 6,000 financial advisors to receive the same payouts as they did this year — a likely haircut for many FAs.

In November, Morgan Stanley similarly raised the revenue thresholds that many of its 15,000 advisors must meet to get the same payout percentages in 2020 that they received this year. Effective April 1, the Morgan Stanley thresholds increased by about 10%, as FA-IQ previously reported.

UBS’ changes to its grid are detailed in the first chart below.

“The Morgan Stanley and UBS payout cuts show that there’s been enough industry consolidation so that these firms are no longer worried about losing productive advisors if they monkey with their grids. That wasn’t always the case. There are only four wirehouses left and most of these firms feel that they have more than enough advisors anyway,” says Mark Elzweig, a recruiter and president of New York-based Mark Elzweig Company. 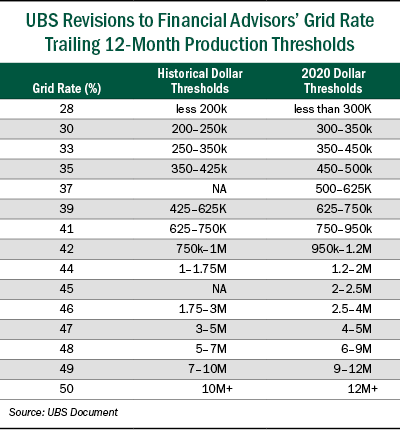 “Firms don’t want to pay advisors more for asset appreciation in their accounts during a bull market. The problem is that once they chop the grid, they’re not going to boost it back up when markets turn down," Elzweig adds.

UBS management rolled out the 2020 compensation plan, describing it as leaving its “core components” as “unchanged” — a characterization that particularly irked some advisors, according to Danny Sarch, president of recruiting firm Leitner Sarch Consultants. Sarch spoke to six UBS advisors after Jason Chandler, head of the wirehouse’s U.S. wealth management division, sent a memo to the FAs about next year’s plan.

In Sarch’s calculations — based on the grid threshold increases — advisors with $1 million in production who had made $440,000 this year would see that shaved in 2020 by $20,000, all other factors being the same.

In his memo, Chandler emphasized that management had increased “net new business awards.”

Under the new award schedule, UBS advisors who reach a threshold of only $1 in net new business (clients’ assets or borrowing amounts) increase their trailing 12 month payout by 1%; advisors who add similarly $100 million increase their payout ratios by 6%, as detailed in second chart below. 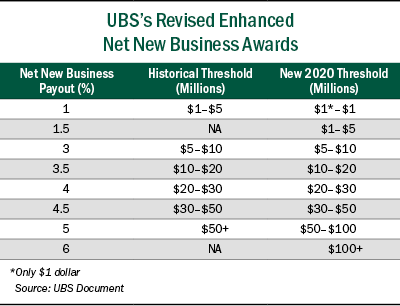 None of the advisors with whom Sarch spoke expressed enthusiasm about the net new business award increases.

“It’s no compensation for the cost-cutting,” Sarch says.

In his memo, Chandler also clued FAs into a collapsing of the wealth management units’ six divisions to only three, effective January 1, which will leave some UBS managers looking for new roles.

This article is a follow-up to breaking news yesterday.