Wealth management firms will need to step up their game on their mobile apps, as they rank lower in customer satisfaction than apps from other financial firms, a recent study found.

Consumers ranked mobile apps from wealth managers an average of 846 on a 1,000-point scale, behind those from other consumer financial companies including credit card providers, retail banks and insurers, according to a report from J.D. Power, which ranked customer satisfaction based on range of services, clarity of information, ease of navigation, appearance and speed of screens loading.

One-third of wealth management customers polled say their firms miss the mark when it comes to security, J.D. Power found.

Additionally, 49% of respondents say the most important communication tool in the apps is the ability to exchange messages securely, but 36% don’t believe the feature is very easy to use, according to the study, which polled 2,892 full-service and self-directed wealth management firm customers in July and August.

Millennials in particular are more likely to sign up for more business if they like the app: 77% of those who rate their app as outstanding strongly believe they would buy more services from their wealth management firm — but only 30% rate the app that high, J.D. Power found.

Consumers ranked mobile apps from Charles Schwab and Wells Fargo the highest, with a score of 865, with Edward Jones following closely behind at 864, according to the survey. Merrill Edge and Fidelity come in just above the industry average, while Merrill Lynch, Ameriprise, E-Trade and U.S. Bank rank just below the average, J.D. Power says.

Mobile apps from Morgan Stanley, TD Ameritrade and Vanguard came in at the bottom, according to the survey. 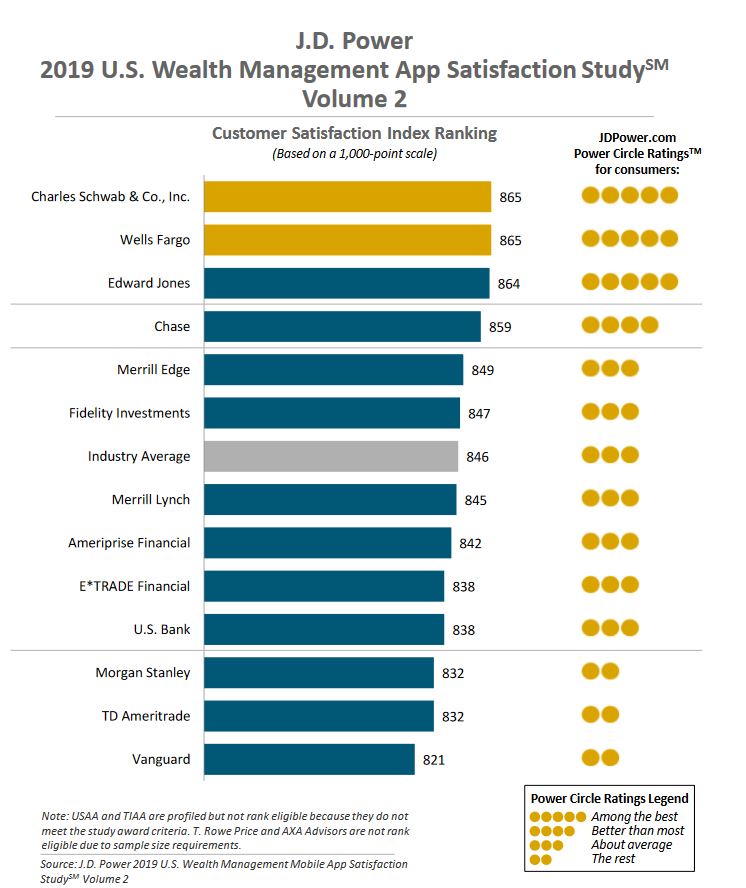