Private equity and alternative investment offerings could represent potential antidotes to fee compression dinging the bottom lines of RIAs. But the remedy comes with its own side effects.

That was the message from several speakers at the Charles Schwab Impact conference, held this month in San Diego.

Advisors must look beyond traditional assets if they are to show value add to clients, experts argued. And thanks to recent PE product developments, advisors at RIAs will have an easier time persuading high net worth accredited individual clients to purchase PE stakes, which historically have led to significantly higher returns than publicly-traded stocks, the speakers said.

“We have to punch above our weight class. If we are not adding value on the investment side, why are they going to pay us one percent," Brett Sharkey, managing director and co-founder of Three Bridge Wealth Advisors, a Portola Valley, Calif.-based RIA, warned an audience of his professional peers.

“Is anyone here even charging one percent? Is anyone going to raise their prices next year?” Sharkey, whose firm reported more than $445 million in assets under management, asked the audience, wagering that most advisors would say no to both questions.

“If you are not dealing in the alternative space, take another look,” Sharkey recommended.

His firm had previously helped clients invest in traditional PE assets, which are notoriously saddled with high minimum invests, illiquidity, capital calls, and an absence of 1099 tax forms, Sharkey said.

But recently new categories of PE products have surfaced “without those headaches,” Sharkey said.

Those new products include interval funds — closed-end funds in which the manager periodically offers to repurchase shares from shareholders. Shares in the funds are continuously offered and available to purchase at the current net asset value. Such interval funds have lower minimums, no capital calls and often deliver 1099s to their investors.

While the interval fund structure was actually established in 1993, the instrument has become increasingly popular in the last few years. According to the Interval Fund Tracker, total net assets reached $27.2 billion in Q1 this year, up 27% year over year.

Nine months ago in March, Nasdaq announced it would expand — based on regulatory approvals it had received from the SEC, IRS and Finra — its existing private company auctions to include interval funds.

At present, few funds that take advantage of the new Nasdaq trading have been introduced on the market, but FAs should expect plenty more to be unveiled soon, says Rice.

Most FAs hardly relish the task or have the resources necessary to do the required due diligence to sort through PE investments for their clients — particularly in the wake of fee compression which forces them to work harder for less.

“It’s just an incredibly hard problem. You don’t normally have a large staff to run off and do due diligence on private companies and private funds to the extent you would want to before making a trade — especially if you’re only going to be able to make that trade for a half of a small percentage of your actual clients,” Rice says.

How should advisors cope with all the due diligence requirements for PE?

Such consultants "interview all the service providers. They do all the work. They analyze the previous track records. They do performance attribution so they understand what really has been driving the returns," says Rice.

Shannon Saccocia also encouraged RIA advisors to rethink and add PE strategies. She is the chief investment officer for Boston Private Wealth, an RIA with $12 billion in assets under management.

“If you didn’t like the alternative options of 2010, come back. We can find things that express our views,” Saccocia told an audience at Schwab Impact.

But not all advisors will jump with enthusiasm at the news that PE investments could be a solution to fee compression, Saccocia and Sharkey both conceded.

Yet given the growing perception among clients and prospects that advisors picking public stocks rarely outperform indexed funds, PE should be compelling, they argue.

“We are all going to work harder ... going to have to learn to educate our clients,” Sharkey said. “Returns aren’t going to be what they have been — what returns there will be, will be in in the alternative space,” he predicted. 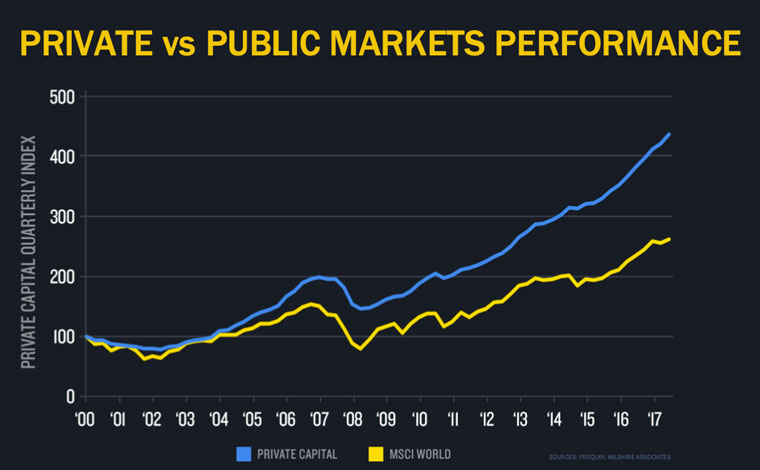