Investing in Asia: Keep Calm and Carry On!

It’s more than 20 years since the British ceded political control of Hong Kong to China. But the advice given by the British government on WW2 propaganda posters – Keep Calm and Carry On – is finding its echo today as experts consider the investment fall-out of the island’s ongoing political strife.

Masses of predominantly young protestors have been demonstrating all summer long against the Hong Kong and Chinese governments over now-withdrawn extradition laws – with disturbing scenes of violence flashing around the globe. There appears to be no let-up in the demands of the pro-democracy activists and few easy paths to resolution. 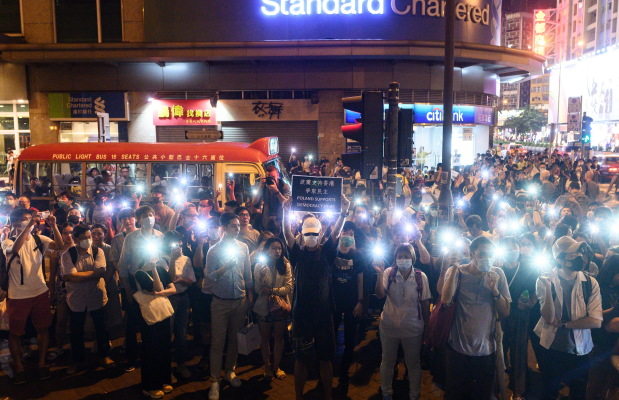 In the turmoil, stock prices have plummeted, with the blue-chip Hang Seng Index falling 7.4% in August, while GDP growth forecasts have been slashed from a 2-3% range to 0-1%, compared with 3% in 2018. Nevertheless, it may be too soon for investors to look for other options.

“It is far too early to worry about recent events in Hong Kong in relation to limiting or changing aspects of investing through Hong Kong markets,” says Anthony Saglimbene, global market strategist at Ameriprise. “Hong Kong continues to offer a variety of international investors a more transparent way to invest in China’s long-term growth potential. Nothing about recent events has changed that aspect.”

To gain exposure to the Chinese growth story, many US investors have invested in mutual funds or exchange-traded funds weighted toward the Hong Kong-listed stocks (H shares) of Chinese firms. This brings a lot of practical advantages versus investing directly. Hong Kong’s legal and regulatory regime provides investors and their intermediaries with certainty and security; strict reporting and governance criteria are needed for a listing on the Hong Kong Stock Exchange.

Further, Hong Kong’s position as a major international finance hub means it is the focal point of multiple and diverse investment flows. This is an important guarantee of liquidity – letting investors move in and out of positions quickly and cheaply. In contrast, retail investors drive sentiment on the highly volatile mainland bourses of Shanghai and Shenzen, sometimes to the cost of overseas investors.

Even with a backdrop of political uncertainty, ongoing trade tensions with the US and the opening up of new routes for Chinese investment, emerging markets guru Mark Mobius cautions against knee-jerk reactions.

“It is a good idea to explore the direct route but for the time being, the Hong Kong route is the easiest and most efficient,” says Mobius, who previously ran Templeton Emerging Markets investment trust and now heads Mobius Capital Partners.

The executive, legislative, and judicial freedoms granted Hong Kong as a special administrative region of China following the British handover are protected, in theory, until 2047. But there is no doubt both Hong Kong and China have changed over the past two decades and will continue to do so, with implications for investors.

“Liquidity has gravitated away from truly local listed companies, towards firms from the mainland, with demand typically driven by a rise in mainland analysts,” he says, advising a selective approach even to H-share investments.

“Many of the newer mainland firms to list in Hong Kong are smaller privately-owned businesses, rather than the large state-owned enterprises, but their profitability and prospects are still very often exposed to the decisions of Chinese regulators. That said, firms with high-quality management can still thrive and there are attractive opportunities.”

As Mobius notes, other channels are increasingly available. China has gradually opened its market structures up to overseas investors but as yet large asset managers and indexes still have only a small allocation to local ‘A-shares’. Saglimbene says access comes at a cost. “For that faster growth potential, investors receive less transparency, less legal protections, and greater restrictions on ownership.”

For many, the elephant in the room is US-China trade tensions, which are weighing much heavier on Chinese economic prospects – and asset prices – than the still-combustible situation in Hong Kong.

A minor recent rebound in the Hang Seng Index has been helped by an announcement from Beijing exempting 16 products from planned tariff hikes ahead of trade talks in Washington next month. President Trump’s positive response – delaying by two weeks a new round of US tariffs – bodes well. But meaningful progress could depend on Hong Kong remaining calm ahead of the 70th anniversary of the People’s Republic of China on October 1.

“The fact that the markets are rattled and Trump faces reelection next year increases pressure on him, but he needs to strike a deal that allows China to save face too,” says Williamson.