Tony Robbins Split with Creative Planning Was Long in the Making

Creative Planning boss tells the media that the separation was in the works prior to allegations of Robbins’ sexual misconduct.

Creative Planning’s partnership with motivational speaker and best-selling author Tony Robbins has come to an end following allegations of sexual misconduct launched at the self-help guru. But the separation had been in the works for half a year, according to news reports.

Robbins was named the RIA’s chief of investor psychology in 2016, although Creative Planning’s former head, Ajay Gupta, told FA-IQ in April that year that he had started working with Robbins close to a decade prior, when Gupta was still with UBS.

Gupta left the wirehouse in 2013 to start his own RIA, which eventually merged with Creative Planning.

On Wednesday, Creative Planning updated its Form ADV stating Robbins was no longer with the firm — but that was the result of months of negotiation, Peter Mallouk, president of Creative Planning, tells RIABiz.

"Tony got a taste of the world of regulation and he didn’t like being a supervised person," he tells the web publication. "For six months we’ve been negotiating an exit. This (contract termination) was culminating this month, regardless."

The split was amicable and Robbins has stayed on as a Creative Planning client, Mallouk tells RIABiz.

A spokeswoman for the firm confirmed the timing of the events to the web publication. 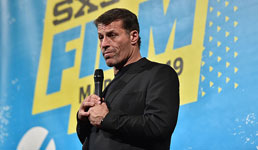 Robbins, meanwhile, posted an open letter on May 17 calling the BuzzFeed investigation an “inaccurate, agenda-driven version of the past, pierced with falsehoods,” RIABiz writes.

On May 22, Robbins accused BuzzFeed of “flat-out lying” in a YouTube video, according to RIABiz.