UBS Strikes Back Over Justice Claims in Mortgage-Backed Securities Lawsuit

The U.S. government says the Swiss bank’s actions caused billions of dollars in losses to investors.

Swiss-based UBS Group, which has one of the largest wealth management operations in the U.S., is facing a civil suit from the Justice Department claiming the firm misled investors about billions of dollars worth of residential mortgage-backed securities leading up to the financial crisis that hit economies worldwide a decade ago, the Wall Street Journal writes. But the bank has fired back countering that the government’s claims are baseless.

“Investors who bought [residential mortgage-backed securities] from UBS suffered catastrophic losses, which not only caused direct harm to those investors, but also contributed to the financial crisis of 2008,” said U.S. Attorney Richard Donoghue, according to the paper.

The DOJ’s complaint alleges UBS securitized over $41 billion in mortgage loans through 40 deals backed by subprime and other mortgage loans and that investors suffered “many billions of dollars” in losses as a result, the Journal writes.

The Justice Department didn’t specify what it’s seeking in damages, according to the paper. But other large institutions, such as Swiss-based Credit Suisse and Germany’s Deutsche Bank, paid out billions of dollars in settlements with U.S. authorities related to the financial crisis.

UBS tells FA-IQ in a statement that the Justice Department’s claims “are not supported by the facts or the law.”

“UBS will contest the complaint vigorously in the interest of its shareholders,” the firm says in a statement. “UBS is confident in its legal position and has been fully prepared for some time to defend itself in court.”

In its defense, UBS plans to present a number of “significant facts,” such as the “massive” losses the bank itself suffered as a result the collapse in the market for RMBS, the company says in a press release.

The company claims it lost close to $900 million on the RMBS in the DOJ’s complaint, and says it was more than the losses on the certificates the firm sold to any other single investor, suggesting that any inferred fraud “was flatly against its own economic interest,” UBS says. 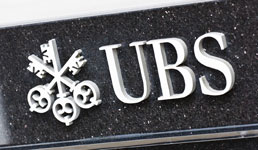 The company also says it wasn’t a significant originator of U.S. residential mortgages and that it fulfilled its disclosure obligations.

UBS claims any penalty should be limited to losses to federally-insured financial institutions, which it says were lower than its own losses in the same RMBS. And the firm says the DOJ’s allegation that UBS’s supposed misrepresentations caused the losses to investors “flies in the face of the history of the housing crisis,” which it says was caused by various factors outside its control, such as government policy, according to the press release.