Last week, the names of Morgan Stanley’s women managing directors were up in lights on an exterior wall of the wirehouse’s Manhattan offices on 47th Street and Broadway.

The illumination was part of a two-day affair Morgan Stanley hosted in New York for its 350 women managing directors worldwide, about 25 of whom are financial advisors. Morgan Stanley scheduled the gathering to launch a multi-year campaign to propel more women to its top tiers of management, where only a few have landed so far. Only three women occupy seats on Morgan Stanley’s 17-member most senior governing body.

But the firm wants to increase the number of women among its managing directors and top management ranks, according to what James Gorman, Morgan Stanley’s CEO, told the gathering last week.

“This was not just lip service. They said lots of women are being hired, it’s just hard to keep them,” said one Morgan Stanley managing director, a woman, who attended the conference but declined to be named.

Officially, Morgan Stanley is optimistic about women growing in stature at the firm.

“We believe that women make good financial advisors – they are listeners, collaborators, relationship builders and multi-taskers. They care not just for economic wealth, but for social and environmental wealth. This is critically important as the wealth management industry continues to evolve from stock picking to goals-based planning across the entirety of a client’s wealth,” a firm spokesperson wrote in an email to FA-IQ.

In the same email, the spokesperson listed the initiatives Morgan Stanley has launched recently to advance women in the workplace. These include an onboarding program targeting people who have taken years off to be with family; the nomination of some 77 women employees in the past five years to join MAKERS, an organization that celebrates innovative, groundbreaking, trailblazing women; and “a huge focus on promoting women into our branch manager ranks which we have done over the years not only by attracting women from outside of the firm from key roles but from creating pipeline roles for them to prepare for the roles,” the same spokesperson writes.

Morgan Stanley’s “focus on hiring female trainees into the business has increased over the years,” the spokesperson adds.

“We have also extended the amount of time that someone can be in the trainee role to help them gain more experience before becoming an FA,” she writes.

But outside the firm, skeptics persist, raising doubts about Morgan Stanley’s long-term commitment to advancing women to its top managerial ranks.

“It’s the lie,” says Linda Friedman about claims of commitment from the wirehouses – including Morgan Stanley – to advance women. Friedman is a partner in Stowell & Friedman, a law firm which has won more than $300 million in class action settlements based on discrimination lawsuits it filed against other wirehouses, including Merrill Lynch and Wells Fargo, and has pending bias claims against Morgan Stanley.

In one lawsuit against Morgan Stanley, Friedman has argued against the wirehouse could not bar her client from pursuing class action discrimination cases against it in the public courts by claiming it had expanded its arbitration agreements with a mass email to employees to require such claims go before Finra panels. 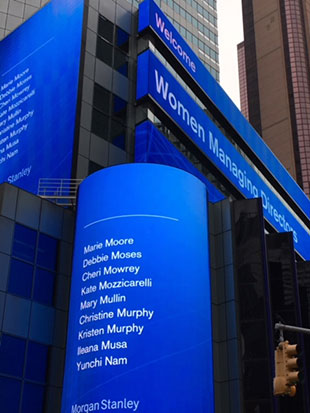 So far, however, Friedman has not succeeded with those arguments. On Oct. 3, U.S. District Judge John Koeltl in Manhattan, who is presiding in that case, ruled in favor of Morgan Stanley and labeled as "not persuasive" Friedman's arguments about the mass email failing to give employees enough notice of such a significant change; in the same ruling, the judge ordered that her client take discrimination claims to a Finra arbitration panel.

“People who want to better the situation for women will expose themselves to liability,” Friedman says. “If you need to put that much energy into getting rid of lawsuits rather than taking action to address disparities, good change doesn’t happen,” she adds.

But Morgan Stanley doesn’t deserve to be singled out, since most of the wirehouses are “all the same,” Friedman says. “When the economy is better and their firms’ stock is rising, wirehouse managers talk more about advancing women and they have a bunch of fancy parties. Then in bad times they stop. That’s why there is no noticeable difference in the numbers of women in management for decades,” Friedman says.

Earlier this year, Sallie Krawcheck specifically singled out Morgan Stanley as not giving women employees enough money and power. Krawcheck previously ran the Merrill Lynch Wealth Management arm of Bank of America, and served as head of Global Wealth Management at Citigroup. She now leads Ellevest, a female-focused online investing platform. In February, Krawcheck posted online a list of Morgan Stanley’s managing directors with the tagline “… something is missing …” Only a few women’s names were on the list.