SEC Chair White Will Step Down in January

Mary Jo White, the political independent appointed in 2013 by President Barack Obama to lead the SEC, will step down from her post in January, the Wall Street Journal reports.

White’s announcement comes less than a week after Republican candidate Donald Trump won the U.S. presidential race. Her departure will likely lead to a Republican-appointed replacement who will ease the SEC’s tough grip on the financial industry, the Journal writes. Under White, the SEC has pursued a record number of enforcement actions: as of October 13, the agency brought 868 cases and collected more than $4 billion in fines, with many of the actions directed at RIAs.

Last month, the SEC also launched an examination of protections RIAs offer whistleblowers. The agency has also been trying to pass a rule to allow third-party examinations of RIAs, as the SEC has only been able to examine about 10% of the 11,800 RIAs it oversees. In addition, the agency has been working on a fiduciary rule akin to the one the Department of Labor unveiled in April to require retirement brokers to put clients’ interests first. However, neither the RIA third-party exams nor the fiduciary rule were likely to be approved before Obama stepped down, as reported previously. With a Republican-leaning SEC, the fate of the rules remains unclear.

President-elect Trump has already appointed Paul Atkins, a Republican commissioner who left the agency in 2008, to head the transition team in regard to financial regulatory bodies, including the SEC. 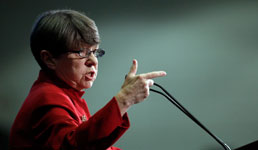 The agency’s two other commissioners include Democrat Kara Stein and Republican Michael Piwowar, who is expected to take over as interim chairman of the SEC until the Senate confirms Trump’s choice for the job. But two of the five commissioner posts remain empty as the Senate never confirmed the candidates Obama nominated over a year ago. Therefore, White’s departure may result in temporary gridlock, with one commissioner being able to veto any enforcement or regulation, the Journal writes.

While Trump’s plans for the financial industry remain unclear, his transition team said November 10 that it’s working on a plan to “dismantle the Dodd-Frank Act” put into place in 2010. Scott Kimpel, a partner at Hunton & Williams and a former legal adviser to a Republican SEC commissioner, tells the Journal that everything under the act “is now up in the air.”