Would You Send Your Clients “Fitbit” Alerts for Overspending?

Financial advisors could soon be sending automated messages to their clients’ mobile phones to help with their day-to-day finances — based on where the client is, Reuters writes.

Mobile apps from financial advisors could soon be using GPS technology to warn clients against staying too long in their favorite store, for example, according to the newswire.

Financial-fitness apps are already in the marketplace, according to the newswire. Ally Financial introduced its Splurge Alert app, which uses geolocation to warn clients when they’re too close to a predefined list of establishments where they’re likely to overspend, be it on coffee or shoes, Reuters writes. Toronto-Dominion Bank, meanwhile, has an app that will send a mobile alert when clients go above their average monthly spending, according to the newswire.

Other executives at the summit agreed with Casady’s assessment of the creep factor of mobile apps reaching consumers based on their location, but argued that there are benefits, according to the newswire. 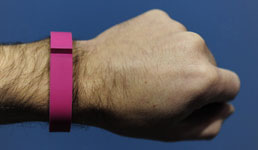 Neesha Hathi, the leader of client experience and digital platforms for individual investors at Charles Schwab, drew a parallel with Fitbit, the health and fitness tracker: financial fitness and physical fitness are both long-term pursuits in which the results aren’t immediately evident, she said, according to Reuters.

Spending money today may not hurt until much later in the future, Hathi said, according to the newswire. Casady, meanwhile, added that the industry has to be careful, but that it would be great to have “a reminder that allows you to be part of someone’s life even when you’re not there,” Reuters writes.